Showing Honor with the Flag

In America, the last Monday of May is Memorial Day. Most people view it as a holiday, and the beginning of the summer vacation season.

But the roots of Memorial Day trace back to the end of the American Civil War. It was a time to honor the many Union and Confederate soldiers who died in an awful bloody war.

Honor means esteemed; having an illustrious reputation; show respect towards.

Honor is not a value that comes naturally to most people. It must be learned. It also needs to be practiced or it is forgotten, which is one of the reasons we celebrate Memorial Day.

Over the years Memorial Day has been expanded to honor all Americans who died while in military service. Many people visit cemeteries and memorials. In national cemeteries, volunteers place an American flag on each grave.

For acts of bravery and courage, some soldiers are posthumously awarded various medals, including the Purple Heart. Others are simply acknowledged for their service, dedication, and willingness to pay the ultimate sacrifice.

Honoring with the Flag

The half-staff position remembers the more than one million men and women who gave their lives in service of their country. At noon their memory is raised by the living, who resolve not to let their sacrifice be in vain, but to rise up in their stead and continue the fight for liberty and justice for all.

For everyone who desires to honor the men and women who paid the ultimate sacrifice, Memorial Day is an important event. It’s a time to come together and remember, reflect and truly honor those who have given everything in service to their country. 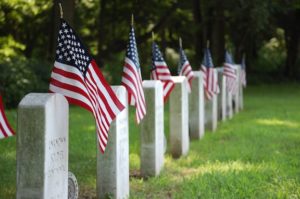